Five children attended the first meeting which was held in her flat. Mr R.E. Holdham, who had the butcher’s shop in Vesta Avenue, also took an interest and as well as actively helping Miss Welton, offered the use of a room at the back of his shop. As the membership continued to grow, a Nissen hut was acquired which was built in the alleyway at the bottom of Tavistock Avenue near Mandeville school in 1951. When Miss Welton was unable to carry on actively helping the school, Mr Harry Collins and his wife Victoria of 118 Cottonmill Lane took over, with the help of Mrs Amy Welch who lived at 20 Pemberton Close. Mr Collins was also chairman of the Cottonmill Men’s Club and he and fellow members erected another larger Nissen hut in their spare time.

Vandals burnt down these two huts in 1964 but the school still kept going. Mr Collins was reported saying at the time: “It came as a terrible shock to me, but it’s no good just sitting down and crying. We are determined to start again from scratch. My wife is very upset because the children’s drama group which she runs will have to look for a new place for rehearsals. At the moment, we are holding them in our house. We lost all the school’s equipment in the fire, except for a record player we managed to salvage from the small hut – things which have taken us years to obtain. There’s not a trace of the brand new organ, and all that remains of the piano are a few charred strings. Perhaps our greatest loss was our large ornamental bible which has been with the school since it started. I am very touched by the response of some of the local people. On Sunday we gathered the children together in the charred ruins of the small hut to try to decide what to do next, and before we knew what had happened we received an offer from the 19th St Albans Scout Group to use their headquarters each Sunday. Our new Baptist minister, Rev. Murray Warren, also spontaneously came to our aid by providing us with hymn books and other church materials.”

Four years later later, the Sunday school had raised enough money to build another prefabricated building on the site and the school continued to thrive with over 80 children on the register. Every two years, the school chose a May Queen or Rose Queen and the ceremony of the crowning of the Queen took place in Mandeville school.

The Sunday eventually closed down when Mrs Collins retired. This was in the late 1980s. The building suffered another arson attack and eventually had to be pulled down. The area, where the Sunday school once stood, now contains mobile homes. 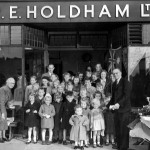 The Sunday school in the butcher’s shop in Vesta Avenue. Miss Welton on left 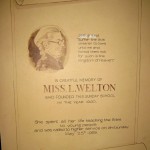 Plaque to Miss Welton which hung in the school 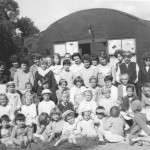 Outside the old Nissen huts 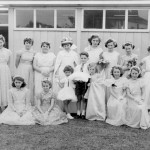 1958 and 1959 Rose Queens, Ann Dymock and Christine Baulk, and attendants. 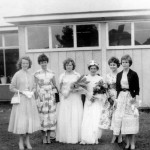 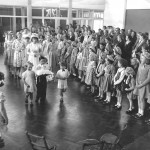 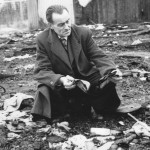 Mr Collins looking at the aftermath of the fire 1964 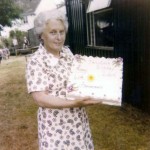