Kelvin Callow, born in 1946, has written up his memories of living on the Cottonmill Estate and kindly agreed to share them on the website.

“When I was very young I lived with my parents at my Gran’s house in Cottonmill Lane, at the junction with Priory Walk. My uncle was three years older so he was often made to look after me when playing out. When Nuns Lane was built we moved into no. 20. Next door lived the Knights and Bernard, who was a little younger than me, became a good friend. We often used to play games in the street which was quite safe, as there was only one car in the road (Mr. Wells taxi). We played football, marbles and hopscotch. If there were a lot of us we would go to the field at the top of the road. Here we played large games of football. There was also a roundabout and swings. Jumping from the roundabout was popular as well as trying to “go over the top” on the swings. There was also a large oak tree so climbing that was a challenge.

Bernard and I often played with our “Dinky “cars in our back gardens. In the evenings we would jog along Cottonmill Lane, Abbotts Avenue, Gorham Drive and then up Nuns Lane. We would do this 2/3 times. When mixing with my uncle’s older friends, we played more dangerous and stupid games. One was to put penny coins on the railway line to Hatfield and let them get squashed. Even sillier was to play “chicken” across the level crossing on the Abbey line. Another was to cross the weir at Sopwell Mill as fast as we dare. Sometimes the workers would spot us and shout, which all added to the fun. War games across the fields was another popular game though there were usually disputes as to who had won.

On a Friday we would scour everywhere for Tizer bottles to take back and claim the money on them (2d, I think). On the Saturday morning we would gather as many newspapers as we could find and together with any old woollens we would take them to Pearce’s in Sopwell Lane where my Uncle would try and get enough money for Saturday morning pictures in London Road.

When I was about ten, I had a bike for Christmas. Then I was able to go to Napsbury train spotting. I also remember cycling to Park Street across the back of Handley Page. On one occasion I remember reaching the main road, looking right and not left. A brand new car on trade plates was overtaking a lorry and my handlebars ran all down the side of the car. The driver was so shocked that I got up that he didn’t do anything apart from check that I was OK.

I remember two houses in Nuns Lane getting struck by lightning. One was the Titcheners and the other was the Burrowes. I remember going to St Julian’s Church with my dad in the hut in Abbots Avenue. It was very warm. Then my dad fell out with the vicar and we went to the Baptist Church opposite.

In our early teens, Bill Clark started a men’s table tennis team in the hut. My dad played along with Michael Sharpe’s dad. I used to go and watch along with David Clark and Michael. Gradually we were encouraged to play and we were allowed to practice in the church hall. We then entered the league playing against men’s teams. We also got proper coaching from a lady called Gwen Robinson, who rode a powerful motorbike. In the school holidays she coached us at a large house in Hatfield Road, where the owner had a table tennis room. We were picked for a representative team which played Watford youngsters at the EAC canteen. I remember losing heavily to a player whose name might have been Seamarks. I think the team lost too.

I also remember that on a Saturday evening a Mr Ackers would come round in his van and if my dad’s team had done well at football I would get a Bounty bar – a real treat back then. 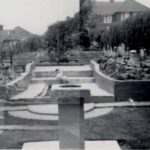 Kelvin’s father won an award from the Council for his garden: 20 Nuns Lane