I remember that when I joined the cubs my mum had to take me to the scout hut in Waverly Road to buy my uniform. Akela was Derek Cooper who had a motorbike and lived in Redbourn. I can remember learning to tie various knots (reef, bowline and slip). We could also earn badges which you wore on your left arm. I remember First Aid and we had a man come to teach us rifle shooting. I also did my messenger badge.
Once a year was “Bob a Job” week. You had a book and went round knocking on peoples’ doors and asking to be given a job. Many people gave you little things to do. One lady wanted her back garden dug, which took ages. A friend knocked on Bruce Forsyth’s door on the Drake’s Drive estate and got a pound! In return for doing a job you were supposed to be given a shilling (5p today). Some gave more, few gave less. This went towards funds. We also raised money through Jumble Sales.

In the scouts I loved camping. I remember going to Gorhambury pulling the Trek Cart (imagine that today). While we were there we had sing songs and Jack Burrows (the gamekeeper) gave us some rabbits which we gutted, covered in mud and cooked in the ashes of the open fire. Delicious. At the end we had to fill in the latrines and replace the turf. I also remember camping at Gilwell. I did my camping badge but can’t remember who came with me (perhaps Geoff Stone?). We were dropped off somewhere in Buckinghamshire and had to do a hike. Then we had to ask a farmer for permission to camp. At the end of the weekend we had to get him to write a report to say we had looked after things and then we had to make our way back to the pickup point. We also camped in Snowdonia and climbed Snowdon. It was really windy but we had splendid views.

In my last year Jack Smith took us to Luxembourg. We walked along the main road from one town to another. There was no path but very little traffic.
We also had football teams. We beat the 16th. 28-2 and drew with Sandridge who had not lost a match. We also lost 4-3 and 0-9 to the 4th. So we learnt to lose as well. At the end of the season four Spurs players came to our meeting and signed photos. They were Alf Stokes, Ron Henry, Terry Dyson and Mick Dulin.
We had an annual visit to the Ralph Reader Gang Show. This was a coach trip and very enjoyable. There was also a day trip to Camber Sands. It took a long while to get there and there were tank traps all over the beach. This was a highlight because families did not always get a summer holiday.
The leaders tried to vary what we were up to at meetings. I remember two occasions particularly. The first was boxing. I was paired with David Clark (later to become an ABA finalist). His first punch knocked me silly. I had a very short boxing career!! The second was Stave Fighting. I can’t remember my opponent but he managed to bash me in the eye and I ended up in A&E. I lost the sight in my left eye for about a week. Then I became a student in Birmingham and lost touch. Sad that the group no longer exists. 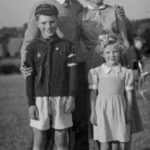 Kelvin in his uniform with his family 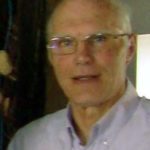 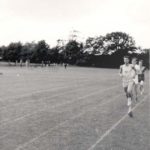