I was at Mandeville from 1954 to 1960, and have very much enjoyed reading the reminiscences of Kelvin Callow, James Watkins, Catherine Mackenzie Davies and others. My brother Brian was there from 1955 to 1961, and my sister Jacky from 1958 to 1964. We lived in Trumpington Drive and had cousins, Glenn, Derek and Vicky, who lived in Gorham Drive and who were also at Mandeville at roughly the same time.

I recall Miss Knight, the headmistress, as being very serious and focussed; she rarely smiled, but inspired us with her calm confidence and obvious dedication. I imagine her life revolved principally around the school. I remember her taking morning assembly, the children processing into the school hall class-by-class and two-by-two to the accompaniment of classical music, which was played on a gramophone in a large wooden case on wheels. The records were 78s, I think, and a blackboard to one side displayed the piece being played. I had the impression the stock of records was not very extensive, as Handel’s Water Music and The Arrival of the Queen of Sheba seemed to come round often.

I started in Class 10 with Mrs Burrell, accent very definitely on the second syllable. This was a spill-over class held in the Baptist Church in Abbots Avenue. Mrs Burrell with her greying hair, sober dress and motherly manner must have been in her 60s. On my first day, butterflies in my tummy, Mum took me into the class and Mrs Burrell led me across to one of the little tables where another beginner, Sandra Norris, was doing a jig-saw puzzle of a farmyard scene. The tables were shaped so that if two were pushed together they formed a hexagon so that six children could sit round and form a little group. I think we were joined by another unwilling pupil, Peter Saitch (Saish, Sach?), as more children arrived and settled down at other tables.

I was nervous and afraid of the walk down to school because of the stray dogs that used to wander round the estate during the day while their owners were at work. My younger brother Brian would often take and collect me, as he loved dogs and was not in the least concerned by even the fiercest. My other worry was that I hated milk, and could not face the mid-morning third of a pint that was prescribed by the welfare state to build up us post-war kids.

We had to wait outside the building each morning for Mrs Burrell to call us in at 9 o’clock, unless it was raining, when we would crowd into the lobby. I enjoyed the games we played in class to help us learn to read. Mrs Burrell would give us cards with part of a sentence on them, and then place other cards round the classroom, on window sills and chairs, and we had to look for the cards that completed our sentences. Sometimes the cards had part of a sum on them and we had to look for the card with the answer on it. Mrs Burrell would occasionally take us for a walk along Berners Drive to watch the engines shunting trucks or the passenger steam trains on their way to and from the Abbey Station.

Some of the names I remember from that first class are Graham Wilson, David James, Mervyn James and John Stockwell. There was also a cheeky little girl called Christine Hall, who had a stock of jokes and rhymes, one being ‘What’s the time, half past nine, hang your britches (!) on the line, if a copper comes along, hurry up and put them on’. Some of the others I remember are unprintable. There was also a little girl called Jenny – I used to take her ‘love hearts’, little sweets with a few words on them like ‘Be mine’, or ‘Forget me not’, which I wrapped up in a little piece of white paper. I think she left after that first year.

The teachers I remember at the ‘big school’ in Mandeville Drive were: Miss Harvey, very young, with dark wavy hair and a touch of eye make-up who rode a Vespa scooter – I thought she was lovely; Miss Cassan (?), also quite young with dark-blond hair and a slightly worried air; Mrs Thorpe, dark wavy hair, and very serious who was a bit older and maintained strict discipline. In my last two years, there was Mr Newby (nickname: Newbyfruits, as in Newberry Fruits) (Classes 3 and 1), who wore a tweedy sports jacket, and had a gentle Yorkshire accent. I liked him because he was strict but fair and had a dry sense of humour. He left the school to become a policeman.

Other teachers I remember were: Mr Staten, who wore a grey houndstooth sports jacket; Mr Mottershead – I was frightened by his name as much as his beaky nose and forbidding frown:, Miss Cape, a youngish jolly hockey-sticks type; and of course Mr Dunkley who I think was known as Major Dunkley, although I’m not sure whether he was a former serviceman or was called that because of his moustache and military manner.

At the main school we had to wait at the infants’ door in the morning and afternoon before being let in. My memories of my time in classes 7, 6 and 5 include a pottery class where we were given a choice of two different-coloured clays but given strict instructions not to mix them together. After play time, we came back and followed the teacher as she reviewed the artistic works on display. When we came to my modest clay pot I saw that someone had sabotaged it by making a hole in the bottom and crimping some clay round the top in a different colour, and was mortified when Mrs Thorpe said it was a ‘very poor effort’. I’d still like to know who did it, after all these years ….

I remember one day Miss Cape took our class when our regular teacher was away. She made us line up outside the classroom, boys on one side of the door and girls on the other. When she gave us the signal to go in I made for the door, but she grabbed me by the ear, yanked me back and barked ‘Ladies first’. I stood aside, one ear burning with pain and the other with embarrassment.

One of the happiest memories is of listening to BBC school broadcasts in class, ‘Time and Tune’ and ‘Rhythm and Melody’, I think they were called, with accompanying song-books. One of the tunes, ‘I’ve been to Harlem’, had a chorus that went ‘Sailing east, sailing west, sailing over the ocean’, which Christine Hall used to sing as ‘Sailing east, sailing west, sailing up Sabrina’s vest’ (I think we all vaguely knew that Sabrina was a glamorous character in an American romcom).

I remember some of the names from those classes: lads such as Terry Davies, Ronnie Ward and Anthony Churchill, and the girls, Lesley Callow (pink glasses and pretty blond curls), Christine Bacon, Gillian Childs, Valerie Smith and Diane Brazier were all lovely.

Moving to Class 3 in one of the huts opposite the junior school was a bit worrying, as Mr Newby was very daunting at first – he was keen on making us recite the times tables in front of everybody, and moved us round in the class depending on how well we’d done in arithmetic and spelling tests. Some of the names I remember from this class, in addition to those in the photo below, are Frances Church, Celia Middleton, Melita Hutley (who I think had come to England with her family from the island of Tristan da Cunha in the South Atlantic), Barry Tabor and Katherine Paisley. Nearly 50 years after leaving Mandeville I was sitting in the audience for the start of an amateur concert in Waterloo, Belgium, when a voice behind me said, ‘I know you’ – it was Katherine.

For me the most memorable event in Class 1 was playing in the school football team – the first match we played was against Abbey School, which we won 6 – 0 The captain was a wiry little lad, I think called Micky Rolf. There were slices of orange at half time, a cheer for the losers and tea in the canteen afterwards. I also remember Mr Newby playing the radio quietly during class one day to hear the general election results, while we worked more or less quietly.

When I left Mandeville in 1960 I took a photo of Mr Newby and some of the class – the viewpoint is low as, apart from not being very tall, I was using an old Kodak box-camera with a top viewfinder that you looked down at.

Other memories: ‘Play-time’ in the large playing field, sometimes going right down to the bottom of the field and missing the whistle – the first whistle meant ‘stand still’, the second ‘line up’, and the third whistle ‘file into class’. We sometimes played ‘Arabs and Legion’, where hordes of kids would charge at each other like battling armies and leave scores of ‘dead’ lying around. Hearing the V-bombers testing their engines at the Handley Page aerodrome at Radlett, and the blissful silence when they switched off. Sometimes a Victor would fly very low over the school with a deafening roar, only a couple of hundred feet up. Sometimes the fire siren in Tavistock Avenue would be tested and cause a din only slightly less painful. The colourful painting taking up one wall of the canteen/classroom just off the main entrance hall – I seem to remember a domestic scene with musical instruments, summer sun and house plants, but the memory is very vague – does anyone else recall it?

On the last day of term we would march around the playground in a large group chanting ‘One more day of school, one more day of horror, one more day in this old dump, we won’t be here tomorra! On the very last day before leaving we were probably just a bit sad we wouldn’t ever be back. 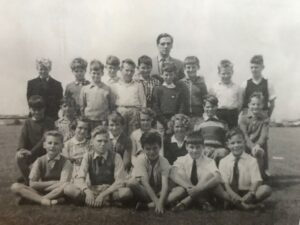 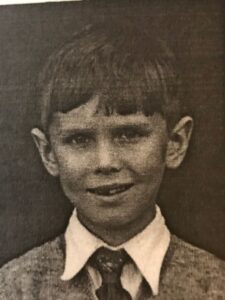 Peter as a child