New Barnes Mill, situated in Cottonmill Lane, was one of the three old water mills along the Sopwell stretch of the river Ver. It is thought that there was a water mill there since 17th century. The Sopwell Manor map of 1666 certainly has it listed. This flour mill , was rebuilt in 1890 by by the Earl of Verulam, whose son the earl of Grimston was living on the estate at Sopwell House, formerly New Barnes House. In 1915 according to an article about the mill in the journal Milling 2 January 1915, a Mr W.F.C. George managed the mill. He learnt the trade at the Whitworth Brothers mill at Wellingborough. The wheat used was farmed locally and was said to be ‘first class native wheat’. Although there was some water power, it was mainly powered by a steam engine. However, there were plans to convert it to electricity. There was already electricity in the mill. There were a dumping hopper and an intake elevator at the bottom of the mill. When the wheat arrives it was sent to eight large storage silos. The journalist who visited the mill that day had nothing but praise for the milling process, the quality of the flour and the efficiency of the workforce, especially Mr George.

The British Flour Research Committee ran the mill from the 1920s. The Cooperative Wholesale society took it over in the 1930s; and then Whitworth Brothers in the 1950s. Michael Clark remembers that when sliced bread first arrived, Weetabix had a depot at New Barnes mill delivering bread to shops, before supermarkets. Weetabix was owned by Whitworths. The mill no longer functions as such and is now used as offices. 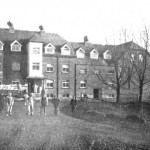 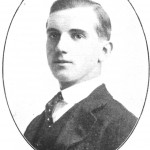 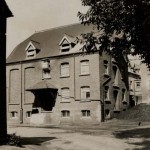 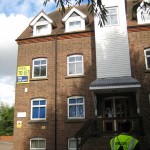 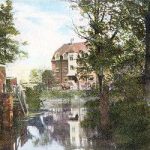 The mill from the Ver 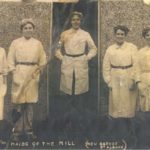 Mill girls 1930s. The woman in the centre is Lilian Peters nee White