Prospect Road first appears in the 1871 census so some of the houses in the road must have been built in the late 1860s and early 1870s. It was originally a cul de sac and ended before St Julians Road. Prospect Road as we know it today was completed when the rest of the road joined on to Cottonmill Lane in 1930.
In 1911, the houses numbered from 1-57 on the river side and 2-52 on the railway side. There is an interesting mix of residents from those living on independent means to working class labourers with many middle class occupations in between. Many of the houses were quite large ranging from seven to eleven rooms. There are several four roomed properties housing larger families.

Among the occupations there are several railway clerks, probably employed in the Abbey Station; several laundresses who worked at the Sanitary Laundry in Belmont Hill; some working in the seed business, obviously Ryder’s Seeds on Holywell Hill; and even a Post Office telephone operator. The Mercer family, chronometer manufacturers, were still living in Prospect Road at this time at numbers 14 and 18.

Number 25, where William Longmire the builder and contractor is supposed to have lived, does not appear so probably unoccupied. There are several other gaps. He appears in the 1891 census for Prospect Road with his sister Elizabeth. Henry Travers came from a well-known chronometer making family. His father worked for Thomas Mercer and came to St Albans when Mercer moved to St Albans. Henry ‘s two other brothers also worked for the company. 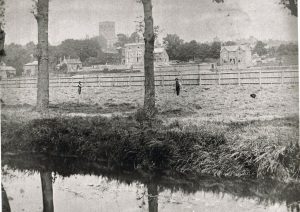 View from the river behind Prospect Road looking towards Belmont Hill and the Abbey. Courtesy of Andy Lawrence