The middle shop was intended to be an off-licence run by Watney’s brewery but this did not happen. The off licence went to the first shop, run by Mr Grout.The middle shop became the butchers.

St Stephen’s Stores was a grocery and also sold sweets, tobacco, newspapers and stationery. It was also the Post Office. Mr Oswald owned the stores. He worked in some official capacity on the railways and lived in London. He put his life savings into buying the Post Office shop and in about 1950 extended the shop and added living accommodation. He conceived the idea to build the parade of shops and applied to the council for permission to build. It was granted on the understanding that no two shops apart from the originals would sell the same goods. He then built the units and rented them out. He also had the bright idea to include a cafe in his shop to provide refreshments for the workers. He and his wife retired in 1965 when they were both well into their eighties. he sold the shops and moved to a big house in Radlett. The shop was then taken over by Mr Worsley followed by Mr Brisco. After that came Mr and Mrs Mason – they introduced self-service. Later the Post Office part was run by Margaret Cochrane. When the Masons retired, Mr and Mrs Patel took over. The shop became part of the Londis chain.

At the other end of the parade, St Julian’s Stores run by Mr Grout was another general store as well as an off licence. There was a ladies hairdresser above the shop run by Mrs Grout. When Mr Grout retired, the shop was sold to Jack and Flo Warner, followed by Mr Bahl and the Mr Mandrha. It is now the local Costcutter.

Vic Foster took over Holdham’s the butchers in 1972. Previous to that he was employed as a manager with Holdham’s. Holdham’s was double fronted. When Vic first moved into the shop, he traded from the left-hand side. They used the whole of the shop but the counter was on the left and the refrigerated units were on the right. His landlord, Tony Holdham, the son of R.E. Holdham lived in the flat above: “When I bought the business in 1972, I said I don’t want this whacking big shop so I cut it in half. Peter Holdham had it altered to make a small shop on the left-hand side, so I moved into the right-hand side“.  The left side was then run as a bakers (Howard’s) and then a greengrocers for a while. Vic Foster retired in 2006 and his shop became an African takeaway and then an Indian takeaway.

In 1952, between the butchers and St Stephens Stores there were originally just two shops: a shoe repairer and cobblers owned by Mr Moss and a chemist plus the post office. Before it became a chemist Mr Oswald used it as a store house for soap powders and delivery bicycles.  One of the earlier chemists was Vic Mansell who committed suicide. After him was Mr H. L. Wood and then Stephen Wise.  In 2002 the Patel family ran the shop until it eventually became a chicken takeaway. The shoe repairer’s became a fish shop. Vic Foster: “The fish shop was the other side of my shop. It was a big shop and that was sort of cut in half and they had freezer sales on the left, not freezer goods, although they might have done. And the fish shop on the right also became a wet fish shop for a time.” One of the fish and chip shop proprietors before Cheongs was someone called Janet. Vic Foster: “Before the fish and chip shop, there was the cobblers: Tom the cobbler. He always used to have second-hand shoes in the window belonging to the people who failed to collect them. The left-hand side of his shop was blacked out because he had his workshop there. It was all very dingy and full of dust.”

Between St Julian’s Stores and the butchers were four shops, from left to right: Granville Supplies, Flora Fruits, Baby Gay and an Ironmongers. Dave Oakley ran Granville Supplies. He sold clothing which could be bought on hire purchase. This shop eventually became the self-service laundry and dry cleaners: Vesta Launderette. Mr Corcoran ran the greengrocers; Flora Fruits. Then someone called Barbara took over and after her, it became Salad Bowl run by Ernie and Joan Ellis. Then we lost the greengrocers as it became a video rental followed by a computer repair shop. That was then split into two, the other becoming a dentist/health centre. Baby Gay was run by someone called Franklin and it sold wool and baby clothes. This then became a baby clothes shop and a hairdressers run by Joan and Alf. Then it became a ladies hairdresser only (Style) which was first run by Janet Hill and then Tony and Anna took it over and made it unisex.  Mr Gridley first had the ironmongers/hardware store. Then came Mr Falke and then Ted and Hilda Ewer followed by Hilda’s son, Ted, Mick and Denise, Ray, Terry Cowen and then a couple of unknowns before the hardware store turned into a needlework shop! Vic Foster: “Next door to Howard’s bakers, when I moved in, was Ted and Hilda’s hardware shop. Their surname was Ewer. Next door to them was Flora Fruits which was a greengrocers and they sold flowers as well. They used to have an open front, no glass. They used to push up the shutters. That was owned by someone called England. Then there was a wool shop run by Franklin.” 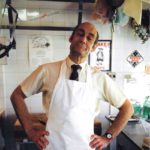 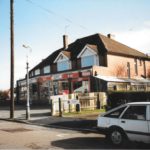 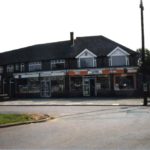 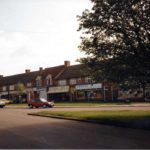 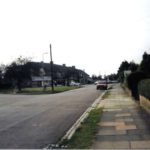 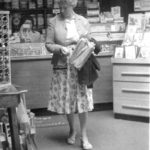