The St Julian’s and Cottonmill Men’s Club, usually referred to as the Cottonmill Men’s Club, was founded in 1953. Meetings were held on Fridays at Mandeville School. According to one of their chairmen, Mr W. Christie, the club was founded on comradeship and sportsmanship. They held Christmas parties for the children on the new estates and day trips to the seaside. Alan Beardmore remembers a great day out in Clacton one year. The club held annual dinners –  photos below of one of them which was held at the Water Splash London Colney in 1955 – and a competition for a cup which was awarded annually, called the “Macgood” Challenge cup which was organised by Mr J. Walker. Some of the founder members of the club included: Mr W. Christie, Mr Cotton, Mr Kerr, Mr Stan Buckingham (also Mandeville school caretaker), Mr Bill Wells, Mr Williams (caretaker St Julian’s School), Mr Beardmore, Mr Bill Walker (who ran the greengrocers in Abbots Avenue West), Mr Peter Beard, Mr Harry Collins, Mr E. Cotton, Mr A. Hill, Mr Ferguson, Mr Ward, Mr Arthur Stonham.

John Buckingham (b.1943) (no relation to Stan) recalls; “I was involved in another club which was in Mandeville School. We had a men’s club up there which I got pushed in at a young age, in my early twenties I think it was, to be a chairman at one stage…… We played snooker and table tennis, cards, dominoes, have a chat and a cup of tea, a good friendly club…normal thing that you get in any club – same people put the tables out and put them away, happens everywhere doesn’t it? That went on for a few years and then…. Nice evenings, Friday evenings.”
Alan Beardmore’s father, F.W. Beardmore, was an excellent photographer and took many photos of the club activities. Some of these, courtesy of Alan Beardmore, are shown below. 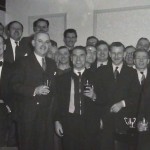 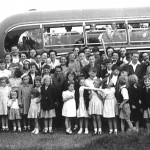 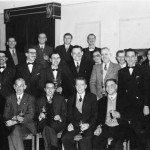 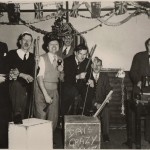 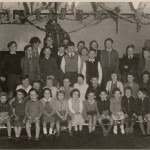 Christmas party 1953. Alan Beardmore is in the centre next to his brother Neil. John Stonham is to Alan’s left leaning forward and David Clarke is on his right. At end of same row on right is David Williams. 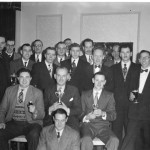 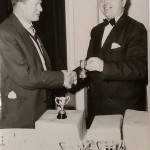 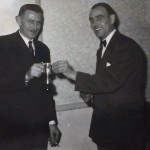 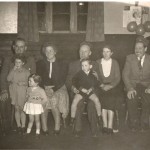 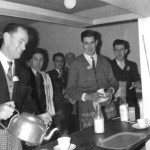 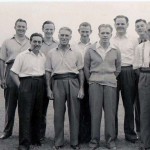