Frances Gordon (nee Parsons) shares her memories of living in one of the two cottages, known as Sportsman’s Hall. Sportsman’s Hall was situated on the corner of Cottonmill Lane and Prospect Road.  Frances born 1934 was evacuated from the East End of London in 1941. She was sent to a farm in Haynes Bedfordshire. She was reunited with her family in late 1945. At that time her mother and brother and sister were living in one of the Sportsman’s Hall cottages. Her mother had to bring up her children on her own after the war. She had two jobs to try to make ends meet.

The earliest reference to Sportsman’s Hall was in 1818 when the household furniture from Sportsman’s Hall belonging to a Mrs Collins was sold by auction. This included a hayrick and in-calf cows. Mrs Collins was described as ‘leaving business’ at Sportsman’s Hall near the Cottonmill, St Albans. It is assumed therefore that the ‘business’ was farming.  In 1841, the census data for that year indicates that they were inhabited by George Howard and family and Edward Holt and family. No one is exactly sure of why they were given the grand name of Sportsman’s Hall but it is thought that it had something to do with the hunt which used to meet further down the road approximately where Nunnery Stables is today. We know there were stables and kennels there.

Frances describes the cottage as having two bedrooms. There was a one level build on the back which was the kitchen. This had a very big stone copper and black grate range. There was no electricity, only gas mantles for light so cooking and hot water was either the range or the copper lit by wood. The front door opened into the very small sitting room. Between that and the kitchen was a small cupboard like room with the stairs leading up to two bedrooms which they all had to share. The front bedroom looked out onto Pearce’s scrap yard. Arthur Bailey was the foreman. Frances’s eldest daughter later married his son. The back bedroom looked out onto a toilet at the bottom of the garden. At night they had to have a torch. It got bitterly cold in winter. One good thing, she recalls, was that there was a beautiful plum tree near the house.

Having no electricity they had to use a wind up gramophone and a radio with an accumulator which Frances would take every Saturday and leave for the week and pick up a new one from the shop on the corner of Watsons Walk and London Road. She also used to run errands for the lady in the next door cottage who was in her seventies.

The cottages were condemned by the Council while they were living there as there were rats in the garden which came from the scrap yard. her mother  tried to get a council property but she was refused because not having a husband, there was no guarantee she could pay the rent.

Frances started at Priory Park Girls’ school in September 1945. her younger sister was at St Peters and her older brother was at Hatfield Road Boys School. Her sister later passed exams to go to the grammar school. At the time the headmistress at Priory Park was a Miss Free who Frances reckoned was probably in her fifties. Miss Benbow taught singing, needlework, geography and history. Mrs Thomson taught various lessons including PE, and netball. Mrs Thomson and her husband ran the Green Dragon pub in London Colney. The Priory Park uniform consisted of a green blazer with two Ps entwined on the pocket, a green and gold tie, white shirt with a grey (or it might have been navy) skirt. There were no facilities for food so they had to walk in a crocodile fashion to Hatfield Boys School every lunchtime. It was there that she met her first boyfriend! Later, they would go to Victoria Street for cooking and housewifery (washing and ironing). In her final year she learnt shorthand and typing one day a week (Pitmans). Each week for half a day they were taken to Cottonmill swimming baths for swimming. She says that she was thrown in and was afraid of the water ever since. She recalls the caretakers: Mr and Mrs Chiesa.

In Old London Road there was a lovely bread shop where the children would spend their money after school on the tempting cakes in the window. On Saturday her job was to fetch a loaf (still warm) for her mother. Her mother also shopped at the general store on the corner of Cottonmill Lane and Boleyn Drive and Sadleir Road. The shop was run by Mr and Mrs Bird. Frances remembers them to be nice people. In 1954, Frances left the cottage to get married. When she returned to the area, her mother was living on the new Cottonmill Estate and later moved to Abbots Avenue. The cottages were demolished in the 1950s to be replace by the present apartment block, still called Sportsman’s Hall. 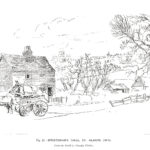 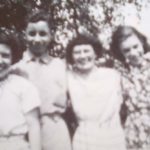 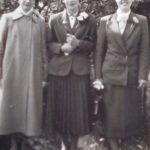 Sportsmans Hall and the stables in Cottonmill Lane – Margaret Brown