The following item has been written by Jonathan Mein, a member of the St Albans and Hertfordshire Architectural and Archaeological Society (SAHAAS) and an authority on St Albans pubs.

In a city where many of the remaining pubs have histories that go back hundreds of years, it is easy to forget the hundreds of pubs that only lasted a few years. Their own brief histories often tell rich stories about the life and times of the locality in which they traded.

One of these is the Railway Tavern, an alehouse opened on Holywell Hill in 1857 by Watford brewer, George Fearnley-Whittingstall. In many ways, he chose a good location. The premises, leased to him by the St Albans Gas & Water Co, were on the doorstep of the thirsty labourers working in the small gas works. More importantly it was very close to the new Abbey railway station, the terminus for the branch line to Watford due to open in 1858. Apart from supplying refreshments to travellers, his tenants could also offer taxi services as well, something which contemporary adverts show they did. Combined with these good opportunities for passing trade were similar prospects for local trade. Railway stations built on the edge of towns were often quickly surrounded by new housing developments.

The Railway Tavern seemed set fair for a prosperous future. However, the pub closed in 1872 just fifteen years later. What went wrong?

The answer lies in a mixture of unfulfilled hope and unexpected competition. Any hope that Fearnley-Whittingstall had for the rapid development of local housing was ill-founded. Instead the rate was at best sluggish with little more than a handful of houses erected in the new Prospect Road in the late 1850s and 1860s.

If local trade was underwhelming, a further problem arose in 1866 that hobbled the passing trade. When it opened in 1857, the Railway Tavern already had competition from the King Harry and the Duke of Marlborough, two hundred yards equidistant on the Watford-St Albans road. Fearnley-Whittingstall must have accounted for their presence in his decision to open the Railway Tavern. What he could not have forecast was the news in 1866 that, even with the lack of significant residential development, the St Albans City magistrates would license yet another new pub in this area. This was the Engineer’s Arms (later to be known as the London & North Western Hotel and then the Abbey Tavern), located on the corner of Holywell Hill and Prospect Road and even closer to the Abbey station. The publicans at the Railway Tavern and the Duke of Marlborough protested loudly in court against this decision. They claimed there was already insufficient trade for the two of them, particularly as the Great Northern station on London Road had taken away local business when it opened in 1865; with the new Midland station due to open in 1868, matters would only get worse.

As the following list shows, fourteen tenants in just fifteen years tried to make a living from the Railway Tavern, the rapid turnover a good indicator that the business was not viable. In 1872 the St Albans Gas Company approached Sedgwick’s, the Watford brewer who then held the lease, to recover possession and convert the premises into a house for the gas works manager. The brewer appears to have accepted their offer with alacrity. 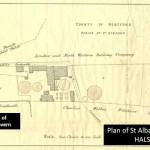 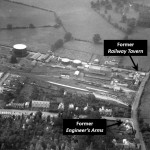 Aerial photo of the gasworks and Abbey Station showing the pubs, 1926.