William Longmire (1812 – 1887) was a builder. His business was in London but he had connections with St Albans and at one point owned two houses in Prospect Road, numbers 23 and 25. He lived on and off in number 25, also called Ousby Cottage presumably while he was working in the area. In 1874, he was commissioned to work on the south wall of the Abbey. In 1879 Longmire obtained the contract to carry out all the controversial refurbishment work on the Abbey commissioned by Lord Grimthorpe.

While he was working on a contract to enlarge Lincoln’s Inn Chapel in London, Longmire removed an impressive arch – built by Inigo Jones in 1623 – and had it placed at the end of the garden at number 25 Prospect Road where it remains to this day. Also, in the rear garden of number 23 (now 23A), there used to be a 13th century decorated stone window frame. This apparently was removed from the east end of the Presbytery of St Albans Abbey during the refurbishment. Unfortunately little of it remains today. Why he decided to put these architectural treasures at the bottom of his gardens is not known. He must have been a bit of an eccentric.

When the Priory Park estate was built in the late 1890s, one of the roads was named after Longmire. 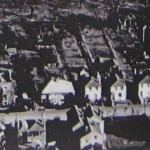 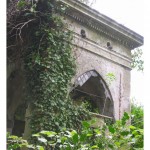 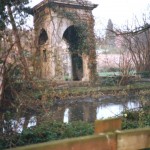 The arch seen from the river 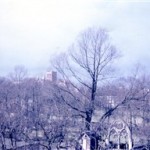