William Beckett, 1939-2017, worked at Mercer’s Chronometers. At some time in his life, he wrote down his memories of those times. His family have kindly agreed to share them.

“At 15 I left school. My uncle, Rick Rickman, worked at Thomas Mercer’s in Eywood Road and got me an interview there. I went for interview and got the job, a 6 year apprenticeship Electro-Mechanical engineer. My starting wage was one pound, nineteen shillings and six pence a week (£7.30 in today’s money!) That was £1-19-6 a week for a 48 hour week.

I remember my very first day, everything seemed so big and different from anything I’d known before. The noise, the smell of oil hanging heavy in the air. I felt quite confused and in awe. I remember thinking ‘Where, do I go? What do I do?’ Fortunately a man in a brown smock came over to me and shouted ‘I’m Frank Foster….you’re working on the lathes with me.’

Frank was the foreman and setter of this section, which was a row of ten lathes operated by women wearing long green overalls and hair protectors (to protect them from the oil and the possibility of their hair being caught up in the machines). I was allocated a spare lathe. Frank showed me how to operate it and then stood over me watching my every move until he was satisfied I could operate it to his satisfaction. Then turned to the woman operator on my left and said ‘Dolly….keep an eye on him.’

At ten o’clock in the morning there was a tea break for ten minutes. A woman who worked in the canteen came round with a huge tea urn on a wooden trolley. The trolley was also piled high with sausage, bacon, cheese and ham rolls!

Dinner time was 12.30pm until 1.30pm and most of the workers went over to the works canteen where they could relax in a nice atmosphere and have a nice meal. The head cook was Mrs. Watts and there was always a choice of three different main meals and variety of desserts every day. There were four other women working under Mrs. Watts (the dinner ladies!) and her kitchen ran like clockwork.

At 5.30 pm a loud bell would ring heralding the end of the working day. All the machines were turned off and there was a mad rush to clock off and go home. Mad rush! More like a stampede!! It was the end of a long day and it was good to get out into the fresh air, no matter what the weather was like.

During the first few weeks I made several friends with other apprentices I worked with: Dick Constable from Wheathampstead, Doug McPherson, Tony Plummer, Colin Farrel and Ray Smith. It was at Mercers that I met Roy Pitkin. Roy and I hit it off from the start. We became good friends and that friendship has lasted for the last 60 Years. I am his son Ian’s godfather. Roy and his wife, Jean, still live in St. Albans.

Later on, after dinner in the canteen, some of us would play cards around a metal table in the workshop. We also met up in St. Albans on Tuesdays when on our day release at college in Hatfield Road. On those Tuesday lunchtimes, we would walk from the college down to London Road to a little cafe called The Woolpack. It used to be on the corner near a bicycle shop. I think the shop is still there and sells lawn mowers now. [The family think he may mean the little shop on the corner near The Beehive pub, which might be an estate agents now.] The Woolpack did a nice egg, bacon, and sausage and chips meal for one shilling and seven pence (about nine pence now). Those were the days!!

We frequented The Woolpack for about six months, every Tuesday. Then we decided on a change and started to walk down to Verulam Road to Jack’s Cafe. It had quite a reputation in those days. The cafe served dinner up a flight of stairs. It was quite dingy, but the food was good and there was plenty of it!

Old man Mercer was quite a character. He was in his seventies and used to tell us every morning that, before he came to the factory, he would go for a swim in his open air pool, summer and winter! And every morning he would walk through the shop floor and seem to take great delight in clipping the apprentices round the ear to, as he would say, ‘wake them up!’

After six months in the machine shop I was sent to work in the gear cutters shop. It was a small shop with only eight gear cutting machines. These churned out gear wheel cogs and cut the teeth. These are the little gear cogs you can see in the back of any watch or clock, they drive the hands and springs and were made of brass. Again it was working in lots of oil. The foreman and tutor was Ken Marriot, who lived in Mayflower Avenue in Park Street. There was also Tommy Ogden, who was the Setter and originally from Lancashire. He lived with his wife Marie in Sandridge. Also there was Nora Doyle, a machine operator, originally from County Kerry, now living in Tavistock Avenue on the opposite side of the road to where we lived . The last person in the little shop was Doris Lawson, a machine operator. Doris also lived opposite us in Tavistock Avenue. [Bill lived in the prefabs in Tavistock Avenue]

After a year I started going to college, Hatfield Road Tec, on a day release. I did my 1st, 2nd and 3rd year City and Guilds certificates. Then I took Ordinary National Certificate at Hatfield Tec in Hatfield. This was all part of the indentured apprenticeship.

Back at Mercers, I went on to technical maintenance with Chris Meadows, maintaining repairing the machines when they broke down. Chris was head of maintenance and I was his apprentice.

I’d always loved drawing, so I got an interview with Gurney Mercer and asked him if I could go into the drawing office. He agreed and my apprenticeship was changed to apprentice draughtsman. I left the noise dirt, grim and oil soaked aprons behind and went into their nice, quiet, clean drawing office. I was extremely happy there doing something I loved. While in the drawing office a man called Maurice Blockley, who was Mercers publicity manager, became very ill with leukaemia. I was asked by Mr. Keeley (the Sales Manager) if I would be interested in taking over Maurice’s job while he was ill and I said yes.

While in publicity I designed The Thomas Mercer Gauge and Tool Exhibition’at the 1960 Olympia Tool Exhibition in London. I had to design the Mercer’s stands and then work with the carpenters to oversee the building of the stands were to correct specifications. Then I went up to Olympia to install and dress the stands with the chippies. Mr. Keeley and Tony Mercer said it was a great success. Sadly Maurice Blockley died from his illness and Tony Mercer asked me if I would take on the job on a permanent basis when my apprenticeship finished. He told me to think about it and talk to Mr. Keeley when my apprenticeship finished in a month’s time. But then I received my National Service call up papers to go into the Army. I wasn’t too bothered about that because I had been in St. Albans Army Cadet Force for six years (4th Battalion Herts Regiment) anyway.

While in the ACF I was chosen as the ‘Year’s Smartest Cadet’ and was chosen to represent the St. Albans Company at the Coronation of Queen Elizabeth in London. I was on the Victoria Memorial all day from 5am to about 4-30pm!

Although I wasn’t bothered about going into the army, I’d just got engaged and I didn’t fancy being parted from my new fiancée for 18 months. Then I had a huge stroke of luck, the government decided to end compulsory National Service! The cut-off point was 1960, so I missed going into the army by 29 days!! Mr. Keeley asked me if I still wanted the publicity job Tony Mercer had offered, but the money wasn’t that good. They were only offering me a couple of quid more than I was then getting as an apprentice for running a whole department. So I turned it down and decided to leave Mercers altogether.
I saw a job in the paper for a Draughtsman at BSP in Manor Way, Borehamwood. I applied for it and got an interview. And at the Interview I met another young Draughtsman. We got talking. We were both offered a job and ended up starting on the same day. And we’ve been close friends ever since.” 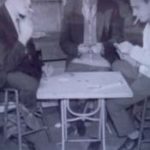 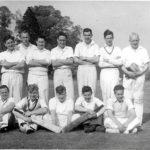