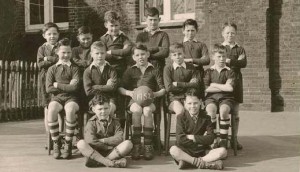 Malcolm Poulton’s cousin John Broadwood is pictured far left on the back row. Immediately in front of him. on the middle row far left is Derek Hawes. His family originally lived in Longmire Road, but at the time this was taken he would have lived in the newly built houses in Cottonmill Lane. Malcolm was at school with his older brother Ernie. They left St. Peters in 1949.