This is a lovely tale which was told to Michelle Mackenzie by her Uncle Bill about his time working at Mercers Chronometers.

In the late 1950’s I was working as a draughtsman in the drawing office of Mercers. St. Albans City Council had apparently asked Thomas Mercer to redesign the St. Albans clock tower face/dial. The original clock face had been there for hundreds of years and was made of brass. When the sun was shining brightly the light reflected off it, so that anyone standing at street level and looking up at the clock could hardly see it. Regarding the new design, the only stipulation was that the face should have the same Roman style. Pete Amiss was Mercer’s Chief Draughtsman at that time and he gave me the job to do.

So I had a little think and came up with idea of a making the clock face black. I put this idea to Pete and he was a bit taken aback. The idea of a black clock face was a bit controversial at that time. I’m not a hundred percent sure but I believe my design was the first black faced clock tower clocks in the country. Pete thought about it then said that he thought it could work and said ‘Do it!’. So off I went and drew up the new face, full size scale, in black with brass hands and numerals.

When it was finished a couple of men from the council came down to Mercers to see the new design. Old man Mercer himself came into drawing office with the two council officials to see my controversial new design. They went into a huddle around my drawing board for over half an hour. And then they all went away.

About a week later we were told the design had been approved and passed by the relevant authorities .The clock was made and installed. Nowadays a lot of clock towers seem to have black faced dials. My baby! I’m quite proud that it will be there long after I’m gone. 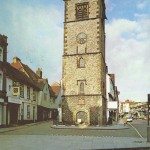 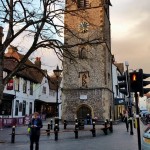